Rick Hageman is our past president, and the father of James, Matt, and Tim.

In 1980, Rick purchased this 1969 Road Runner from the original owner who used it as a daily driver.   At that time, the original owner was a Councilman in a local borough and had suggested a Halloween curfew.  Apparently this did not set well with some of the local boys as his garage was entered and considerable damage was done to the car.  The car needed all glass replaced, headlights, tail lights, and some body work.  While doing various repairs, the Broadcast Sheet was discovered and it  showed it was built without power steering, power brakes, and a Sure-Grip differential, some things Plymouth should have never  permitted. The car came with a front bench seat, AM radio, and the interior was “Pewter”, an uncommon color.  The body style was a coupe and most Road Runners for 1969 were hardtops.  Around 1989, as the car would no longer pass state inspection, due to tail rot, Rick sold it to a co-worker for $600, the same price he paid for it  nine years earlier.   He now wishes he had kept it.

Rick’s first new car, while serving in the United States Navy in December, 1970.  A 1971 Plymouth Duster 340, with a black vinyl roof over Sassy Grass Green. It had a black interior, with buckets, no console, 4 speed manual transmission, AM radio, Sure-Grip, and the High Performance Axle Pack. He ordered it from Brown-Daub in Wilson Borough. He nicknamed it “Ivan”, after Ivan the Terrible: bad on gas, but terribly fast! It was later sold to Tully Chrysler-Plymouth in Washington, NJ.  A young man bought it and within 6 months,  destroyed it by wrapping it around a tree on Route 31. It’s last home was Kober’s Auto yard on the Montana Mountain. Years later, after finding what had happened to it he went to Kobers…an elderly gentleman who worked there remembered the bright green color, telling him he had just missed what remained as it was removed on a flatbed just a week before. He said it was “U” shaped!

Rick bought this from the second owner after being shown a Polaroid of it at a SBMM Club Cruise in the summer of 1991.  One of the Club’s member’s neighbor owned it; he wasted no time going to see and make an offer.   All numbers on the car match, and has mostly original parts.  It was repainted the original color prior to his purchase, and Rick refreshed the vinyl seats.  It has a bench seat, AM radio, 4 speed manual transmission, and Sure-Grip.  He calls this baby “Ivan II”.   In March of 2018, Ivan II was sold  and was replaced with a 2005 Dodge Viper Copperhead Edition. 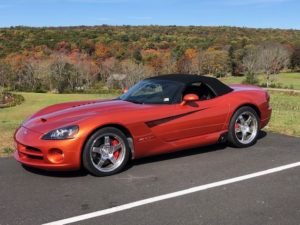 In early March of 2018, Rick started looking for a Dodge Viper to replace his 1972 Demon 340 he sold.  Although it was a sad day to see the old muscle leave, he knew the gentleman who bought it would make it a part of his stable for years to come.  While browsing on the internet, Rick came across this one, a 2005 Copperhead Edition, # 58 of 300,  being advertised from a small lot dealer in North Carolina.  A phone call was made and after seeing photos and having every question answered to Rick’s satisfaction, a deal was struck.  Aside from a Corsa exhaust system, the car is stock.  There was but one ripple in the transaction… a Florida title that showed it was branded.  After many, many phone calls to PennDoT, it was determined that the branding was wrong and the mix-up was corrected… something PennDoT seldom does.  A vanity plate she now sports says she’s the “Deadly 1″… a fitting name for a snake that bites!

Meeting for all things Chrysler since 1990.